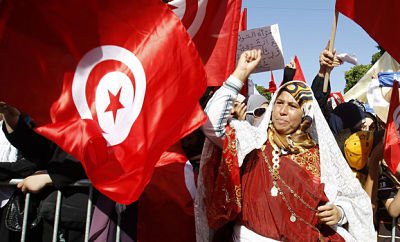 A supporter of the Islamist Ennahda movement attends a rally along the central Habib Bourguiba Avenue, in Tunis August 13, 2013. Islamists and the secular opposition in Tunisia planned street rallies in rival shows of strength on Tuesday, raising the risk of violence and threat to the democratic transition in the birthplace of the Arab Spring. For their part Islamists were set to rally along the central Habib Bourguiba Avenue, nominally to mark Tunisian Women’s Day but effectively to showcase popular support for Ennahda. REUTERS/Zoubeir Souissi (TUNISIA – Tags: CIVIL UNREST POLITICS) – RTX12K0N