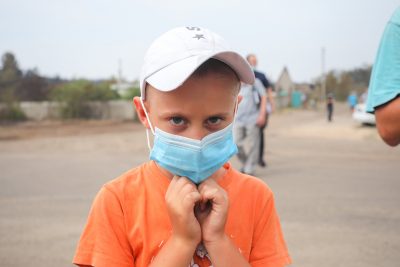 For nearly six years, eastern Ukraine has been enduring an ongoing armed conflict and a subsequent humanitarian crisis. The contention first started in the capital city, Kyiv, after former President Viktor Yanukovych rejected a proposed trade deal with the European Union. Protests ensued, destabilizing the government until March of 2014 when Russian troops took control of eastern Ukraine’s Crimean peninsula and annexed the region. The war in Ukraine has heightened ethnic tensions within the country, resulting in an ongoing conflict between the Ukrainian military and pro-Russian separatists. As of 2019, there have been 3,300 civilian casualties and 1.5 million have been displaced because of the conflict.

The war in Ukraine has also taken a massive toll on the infrastructure and resources in the region. Hospitals, healthcare centers, schools, houses, electrical wiring and water systems have been destroyed as a result of the fighting. Land mines and explosives have ravaged much of the farmland, forests and livestock pastures, taking a toll on the economy. Those who rely on agriculture and forestry have lost their jobs and livelihoods, and many are unable to meet basic needs or repair their homes. As of late 2019, UNICEF estimates that nearly 3.4 million people in eastern Ukraine need humanitarian aid as a direct result of the war in Ukraine. Donetsk and Luhask are amongst the most dangerous places in Ukraine due to those areas being located near the contact line that divides government and non – government territory.

The conflict continues to impact communities and women, children and elderly residents are among the most vulnerable and disproportionately affected populations. In villages along the contact line, most men have joined the military effort, been killed or injured, or fled in search of work, diminishing the population and leaving women to support the community on their own. Nearly 60% of those needing humanitarian assistance in the region are women or children.

With the onset of the COVID-19 pandemic in early 2020, response efforts to the war in Ukraine have become increasingly more complex. The Ukrainian government imposed strict quarantine measures including closing borders, shutting down schools and restricting all non-essential business. Many villages halted or greatly reduced public transportation services, reducing mobility and access to necessities. The contact line, which many relied on crossing daily to reach their place of work, claim pension payments, access healthcare providers and visit family has been closed. It now takes up to two weeks for essential medical supplies, food, and hygiene products to reach the Donbas region.

The COVID-19 pandemic is exacerbating the dangerous pre-existing conditions that civilians have faced for the past six years. The nation’s healthcare system, which has been weakened by the ongoing war is severely underfunded. Due to damaged infrastructure, many villages in the Dontesk oblast region do not have access to clean water, a resource critical to slowing the spread of the virus. Nearly twice as many villages do not have food shops or pharmacies, and deliveries and ambulance services have halted due to the dangerous conditions in the region.

UNICEF has partnered with humanitarian organizations such as Slavic Heart to outline relief plans in response to current conditions. Slavic Heart is a Ukrainian NGO launched in May of 2014 which delivers and distributes medical supplies, clothing, food, hygiene products, rehabilitation and evacuation services in regions of conflict. Its client base is mostly made up of women, children and elderly persons. The United Nations’ refugee agency UNHCR along with the Red Cross are working to reinstate response plans in the region. Priorities include establishing a regular food supply, creating mobile pharmacies and medical services and rebuilding the infrastructure for water systems. For many, leaving the region is not a safe or viable option, making outside aid critical to their survival.

While many challenges continue to face Ukraine, humanitarian efforts on behalf of UNICEF, Slavic Heart, UNHCR and the Red Cross have been offering their support to help the Ukrainian people.

Solutions for Indigenous Communities in Nicaragua

How Hope for Our Sisters Advocates for Women and Girls

How Digital Agriculture Can Help Africa During COVID-19