RALEIGH, North Carolina – Almost half the world — more than three billion people — live on less than $2.50 a day while more than 1.3 billion live in extreme poverty, less than $1.25 a day. As such, the World Bank works to develop goals specific to each developing region in the hope of creating a world free of poverty. 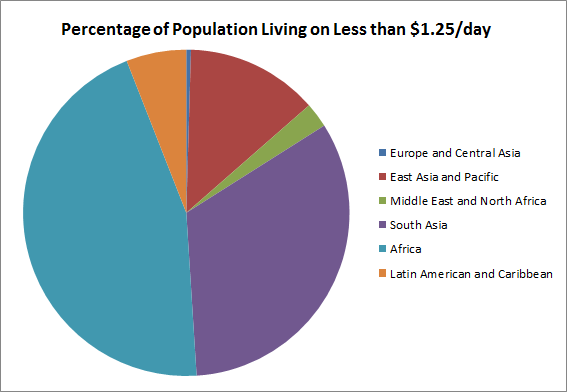 The large influx of refugees from Syria to Lebanon, Jordan and Iraq is putting pressure on those countries and, due to the changing political climate, the World Bank developed a framework for this region based on four pillars: strengthening governance, increasing social and economic inclusion, creating jobs and accelerating sustainable growth. There is, moreover, a focus on gender, regional integration and a competitive private sector. Job creation is targeted towards youth and women and provides an enabling environment for opportunities, competition, innovation and entrepreneurship.

Latin American and Caribbean – 6.5% of the population lives on less than $1.25 per day.

The World Bank’s overall strategy for this region centers on eliminating poverty by 2030 and boosting shared prosperity. Addressing the inequality gap – 40% of Latin Americans are vulnerable to falling back into poverty while only 32% of the population is considered middle class – and creating opportunities for the entire population is a priority in this region. Access to public services remains a challenge in this region, with 7% of the population lacking access to clean water and 20% lacking access to sanitation. While the region lacks in some areas, it serves as a role model in others. Latin America accounts for only 6% of global greenhouse emissions – it has the lowest carbon footprint in the developing world.

South Asia has averaged a 6% growth per year during the last 20 years. Even so, the World Bank continues to support this region with the goals of reducing poverty and boosting shared prosperity. The strategy in this region is based on five pillars: increasing employment and accelerating growth; enhancing human development and social welfare; strengthening governance and accountability; reducing weather, disaster and food vulnerability; and enhancing regional integration and cooperation. South Asia has a young population and the lowest female participation in the labor force. Increasing employment means that this region will need to add about one million jobs every month for the next 20 years. Human development projects include raising school enrollment rates, ensuring nutrition services for women and young girls as well as increased access to safe water.

In Africa, the World Bank places emphasis on regional and national competitiveness, job creation, reducing vulnerability and improving resilience. The World Bank assists countries in Africa with diversifying their economies and generating jobs. By focusing on better health care, preemptively dealing with the effects of climate change and strengthening public agencies to share resources more fairly, the region can reduce the number of people affected by damage from shocks – economic, health-related, natural disasters and conflict. Better management of public funds, including informing the public on what they should expect from their governments, will help improve systems and the region’s capacity to deliver basic services.